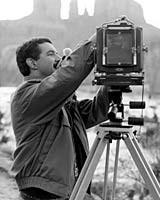 Fredric started out his career in filmmaking and moved directly to Los Angeles.

Feeling a strong need to get back to a more personal approach to storytelling and visuals, Fredric returned to his still camera and the natural landscape that he cherished and sorely missed. In order to capture the natural beauty without compromise, he needed to shoot with the largest camera possible. He taught himself the large format view camera and, as long as his back holds out, will continue working in this age-old tradition.

“There’s something to be said about waiting for the light to be just right … deciding that patience in the field is a stronger connection with the natural landscape than tireless hours at the computer screen, after the fact, trying to make something out of something else.”